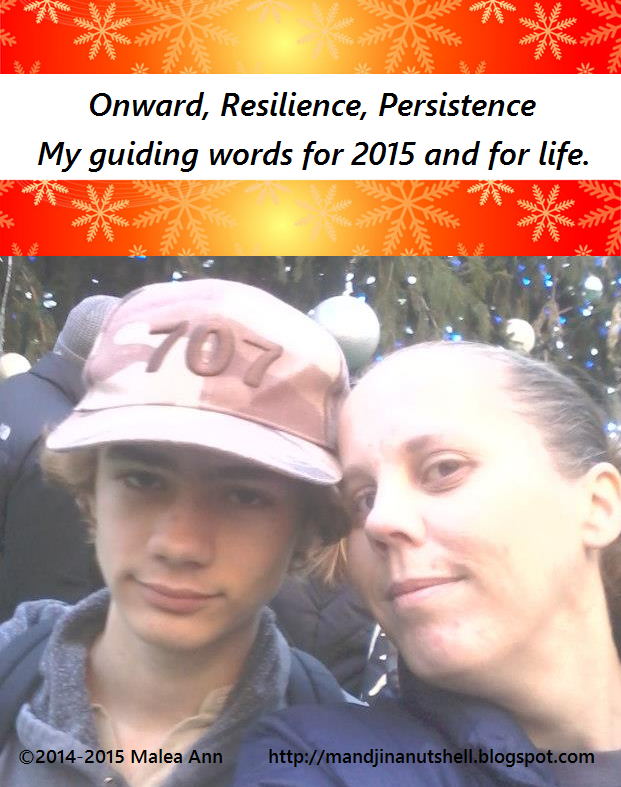 I have mentioned Leonie Dawson and her Amazing Biz and Life workbooks* in the past, and I am working on these workbooks again this year. If you work the workbooks and really follow the tips and plans set out, they pay off. One task in the workbooks is to choose your word for the year. This is a word that resonates with you, has meaning for you, and guides you throughout the year. In the private Facebook group that goes along with membership in Leonie's Amazing Biz and Life Academy*, many of the members have been discussing their words for 2015. Today, I joined in. Below is a slightly edited version of my response to one such discussion.

(The workbooks are free as downloadable PDF e-books with membership in the Academy
or available separately HERE as e-books or bound workbooks.*)

When it comes to words for the year, I have three: Onward, Resilience, Persistence. They have been my words for the last 12 years, and when I keep them front and center and balance my choices and experiences against them, things continue to grow and move forward and change in the right direction. When I lose sight of them, things start to fall apart.


This is the story of my three words.
I was in an emotionally and mentally abusive relationship and had a young child and I was struggling to go to school, to try to "save" or "fix" my relationship, and to be the mom I wanted in my heart to be. My ex threw up block after block after block and I wasn't dealing well. I was a mess emotionally and physically. Then, in April 2002, around my 28th birthday, I hit the wall and decided enough was enough. My ex basically told me flat out that I didn't *DESERVE* a college degree and that I wasn't *WORTH* a college degree - that I was nothing, had nothing, would always be nothing. He'd been telling me this stuff all along, but never so explicitly before.


Finally, after almost four years of this, something clicked.

The very next day I managed to get to school despite all odds (he took the car, he took my money so I had no bus fare, and he canceled the babysitter). I found an academic counselor and told her I had to graduate as soon as humanly possible no matter what it would take and that I was leaving an abusive partner and taking my son with me as soon as I had my degree. Within 30 minutes I had a new major that only required two additional classes beyond what I had already taken and beyond the classes I was already in for that term, and I had a graduation date only 4 months away. I then visited all of my current professors and told them the situation (crying in the first one's office and feeling empowered and strong by the time I left the last one's office), and they all agreed to help me in whatever ways they could (letting me bring my son to class and sitting in the hall so I could hear without my son disrupting the class, emailing me notes, making special arrangements to meet with me outside of normal office hours, letting me do work via independent study, etc). I graduated in August 2002. I researched my legal rights regarding custody of my son, and I made a plan to leave for good (I'd already left three times before) that would allow us to do so safely, legally, and with help from family that lived 600 miles away. On October 15th, my sister and brother-in-law helped me pack a U-haul while ex was at work, and by 5pm that day I had left him for good!Onward, Resilience, and Persistence helped me do that, and they have helped me overcome many obstacles since - some big, some small. They have helped me do things I didn't know I was capable of, and they are helping me achieve life long dreams now. That doesn't mean life is always easy or that I achieve everything I try, but it does mean I am constantly moving in the right direction, even if it means taking the occasional detour to get there.

What are your guiding words for 2015, and how did you come up with them? I wanna know!

*These are affiliate links, but if you are committed to Leonie's programs, they pay off in ways you may not even realize!
Posted by Malea at 12:09 AM

We adore comments! Please leave some! Just note, Anonymous comments go to my spam folder, and I rarely publish them.

Thanks for checking out my blog. Please refrain from using any text, images, or anything else on my blog without my written consent, or without giving proper credit and linking back. Thanks.

Disclosure: This blog accepts affiliate earnings, cash payments, and free products in exchange for advertising, sponsorship, or paid insertions. Such content in blog posts will be listed as such. If no disclosure is made in the post, it is FREE of affiliate or earning links. Any opinions expressed in exchange for payment, products, or perks are my own opinions, and not influenced by others.

Whenever possible, photos credit is given where due, and the copyright is with the original owner.